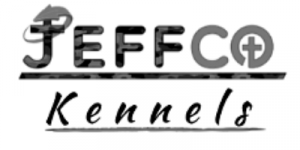 How It All Started!

You never could just buy & breed the first dog. First you must find your foundation. I started thinking about how nice it would be to have a German Shepherd Dog like when I was young. I remember how pretty they were so I told Jeffrey, "I want a German shepherd". He immediately went on the hunt. Jeffrey loves studying bloodlines & pedigrees like he studies maps. He loves that stuff. When Jeff started showing me the dogs he was finding I couldn't believe what I was seeing. It is so hard to find a old fashion discerning yet calm, straight back shepherd these days. We found out the show dog people, changed the appearance of the Shepherd. They have these "roach" backs & the owners have thick binders they will show you all the health certificates & all their achievements & ribbons & reward certificates. It all looks legit so we bought a couple. We kept them a year & they were crazy. They would bark in our face like I didn't trust them, they pace the floors constantly, they would bite your finger if you feed them any treats & I never like the look of the "roach back" but once we got them home the way they ran look so crazy their foot looked floppy. I didn't care how much money or time I had in them or how great their paperwork said they were I had enough. I couldn't take it anymore. It was not what I wanted. 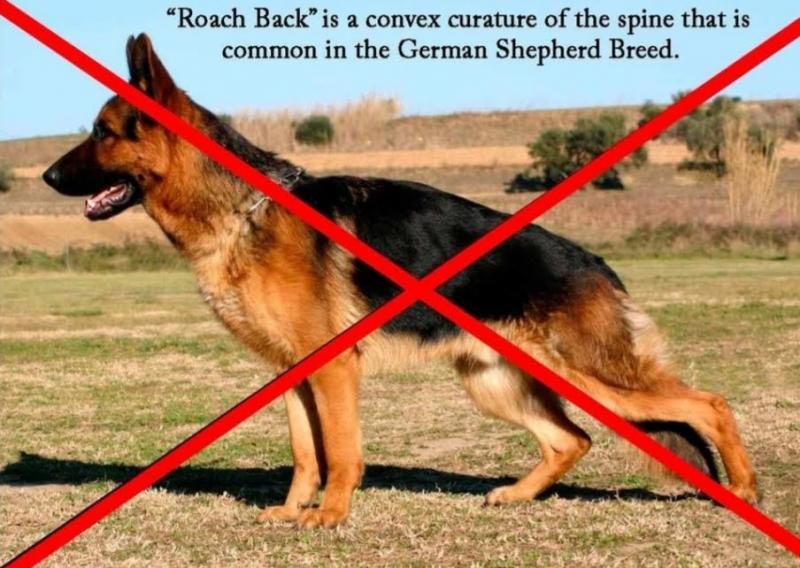 Next Shepherd dog we found was the working line. We got a beautiful pup we called Titus. When we went look at him as a pup I mean he shined. He was like his owners shadow. He never got tripped on and moved like the wind. We brought him home & he was great. I knew that this dog had a high prey drive but I didn't know he didn't have an off button. We loved him but at a year old we placed with a man who lived on an 80 acre farm.

Lord Jesus, what happened to the big beautiful straight back family farm German Shepherd Dog? I mean who would have thought? How hard could it be? But nowadays, what we were wanting was the minority. Most shepherds now either have the curved back that they swear is healthier, tested and winning everything. They say, " that looks better" & when you do find a straight back Shepherd it's off the working lines. That is how they separate them now. The roach back is a show & the straight back is working & they working alright. They need a job, a serious job. like police work. They to hyper and to prey driven for what I wanted.

Thanks to The Good Lord Jeff had ask me several times if I would be interested in the white shepherd. I thought I wanted a black & Tan. Then he showed me pictures & told me how AKC didn't allow to show these cause they were white so they have "not" been altered in any kind of way. They still had the straight backs & they were the original old-time stuff & I was in love. I said, "That is exactly what I want."

We search high & low and found a nice family farm up North that had the White shepherds all their lives and they were Gorgeous! We bought off different litters. We got two males & four females. We named them King, Prince, Queen, Princess, Angel & Diamond.

What to Expect If You Get One Of Our White Shepherds?
These dogs are mentally smart. They are like a human with fur. They will understand your language and they learn everything very very fast. You should just be able to tell them once or twice and they get it. They potty train very fast! They are clean dogs.

Most GSD tend to be wary of strangers or aloof, but not ours.

They are very loyal & would lay down their life if the situations warrants it.

Their drive to retrieve things makes them a companion for entertainment.

They love kids. They are natural nurturers & loyal that they could be trusted with children even the youngest ones. Who better to trust watching over the kiddos than the trusted loyal White Shepherd. they are completely trust worthy making them the idea Nanny.


According to an article in USA Today, 1,500 sheep fell off a cliff to their deaths in Turkey in 2005. One sheep fell, so the others followed suit and jumped. In the end, 450 sheep died. The ones that survived only lived because they were cushioned by landing on top of their fellow herd members. As a child growing up in church, I remember seeing a picture of Jesus with a lamb wrapped around his neck. As I grew older and visited more churches, I remember seeing similar pictures at a lot of places. I never questioned the image. The Bible is clear that God is our shepherd, and we are the sheep of his pasture, so I assumed the image demonstrated that biblical truth. However, several years ago while I was attending seminary, the image of the lamb wrapped around the neck of Jesus was explained to me.

Because sheep tend to stray and will also follow wherever they are led, shepherds often had to discipline lambs that would stray from their shepherd. The shepherd would use his rod to break the leg of a wandering lamb. After binding the break, the shepherd would carry the lamb on his shoulders while the wound healed. If the lamb struggled and fought, it would quickly realize that the broken leg wouldn't allow it to flee. The lamb learned during the healing process that the shepherd could be trusted. The lamb needed the shepherd to provide food, transportation and protection. Once the wound was completely healed, the lamb was fiercely loyal to the shepherd and wouldn't stray from the shepherd's leading.

A few years ago a news story broke about Shrek the sheep. Shrek was a Merino sheep who lived in New Zealand. Shrek became famous because he managed to avoid being captured and shorn for six years. His wool continued to grow and thicken, and his eyes were eventually hidden behind the thick coat. Shrek dodged the sheering by hiding in caves and running from his master. Once Shrek was finally captured and shorn, he carried 60 pounds of wool on his body, nearly six times the average amount. The wool on Shrek's body was enough to produce 20 men's dress suits. It's easy to see why the Bible compares us to sheep. We often follow the crowd, even when it leads to our own demise. We stray from the shepherd who loves us and seeks to protect us. We don't appreciate when God disciplines us. But if we surrender to him we learn through the discipline that God can be trusted. We are often like Shrek the sheep as well. We hide from God, clinging to the things that need to be shorn from us. We become weighed down with the burdens God could easily remove from us. The Bible also shares with us that God anointed his people with oil just as the shepherds anointed the heads of their sheep with oil. This wasn't just a symbolic ritual. Sheep are easy targets for flies, lice and ticks. A sheep that was not covered in oil on his head could easily become the victim of infestations of these pests. However, it wasn't just a nuisance. Bugs would crawl through the ear canal of the unoiled sheep and nest in its brain, eating away at it. The pain from the bugs would be so severe on the sheep that the sheep would bang his skull on rocks and against trees to ease his suffering. The sheep could break his own skull seeking relief from the brain-eating parasites. When God offers to anoint us with his oil, it means he offers us protection from the parasites of this world that seek to eat away at us. 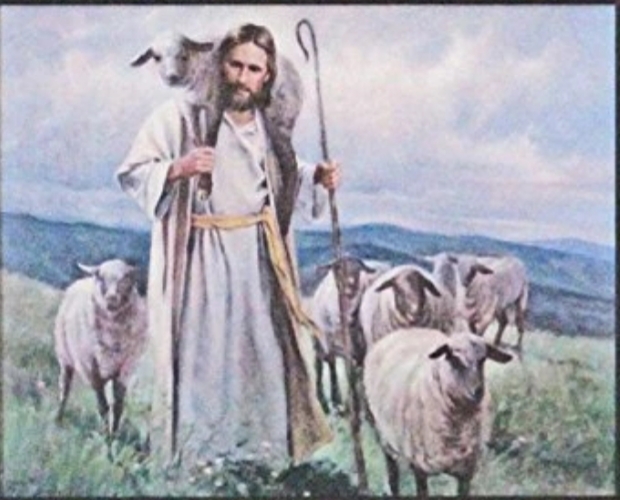 If we hide in caves, or jump off the proverbial cliffs of this world, dodging his anointing and protection, we may become victims of this world. We may become so filled with pain that we hit our heads against rocks to ease our suffering. God seeks to shepherd us through this life. Oftentimes that is through discipline, sheering or anointing. But it is always with love, and it is always with our best interest at heart. He is our shepherd. He can be trusted when we surrender to his leading.

Jamye Lanning Duncan is a curriculum writer and has served as a minister and teacher throughout North Carolina. She holds an Master of Divinity in Christian education and a Bachelor of Science in elementary education. She is married to Dr. Hunter Duncan, and they have two children, Katherine and Cameron. 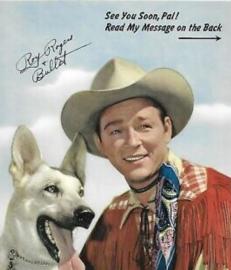 Our White German Shepherds are a direct lineage from the line of Roy Rogers dog; “Bullet” and Rin-Tin- Tin.

Bullet was fast enough to keep up with the camera shots of Roy Rogers galloping on trigger in pursuit of something. Bullet was an exceptionally smart dog. He did everything a good dog would do. He helped Roy & Dale when they were in a fix & rescued people.

When Bullet was not performing he lived a fine life as Roy & Dale's pet. 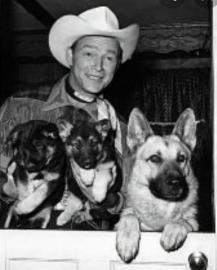 Rin tin Tin is a story of a dog who went from rags to riches. He was an orphan from world War 1 and was found by Mr. Lee Duncan. Mr. Duncan must of saw the greatness in him because he took him under his wings & named him Rin tin tin but called him by his nickname Rinty. Mr Lee trained Rinty to do tricks and to do silent picture work for dogs. Rin Tin Tin immediately was a big success. He appeared in 27 Hollywood films & the world fell in love with him. He was responsible greatly for the increasing popularity of the German Shepherd breed as family pets.